We got the tow dolly and pushed her up onto it.  I cruised the paddock and got a few names of body shops that might be willing to straighten a lemons car.

The car is back at Tedd’s.  We’re all home.  I’ve been looking at craigslist wondering if transplanting all our good parts onto a new, straight accord might be a good thing to do. 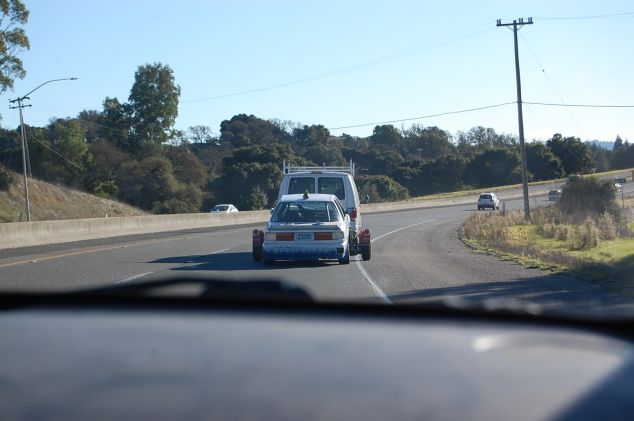 167th place. 14 total laps. The frame is obviously worse than I thought. The axle puked out of the inner cv twice. We can’t even flat tow it now. We are waiting for Tedd to get back

from the Santa Rosa Uhaul with a tow dolly.

When Ewan and i got back to the track this morning our spot was filled by a motorhome and to minivans. By begging and pleading I let some neighbors a little bit down the road give us half a spot of their four. It’ll be tight but workable.

Well seven laps into Jason’s drive (he went first) there was a loud pop and there was no longer power getting to the wheels.  He got towed in (that’s a first for us).  After diagnosing and discussing and testing we decided that it must be broken springs on the pressure plate.  To change the clutch you have to drop the transmission enough to get into the clutch.  We decided that that was a huge undertaking that would likely last longer than the weekend.  So we packed it all up and towed it back to Tedd’s. 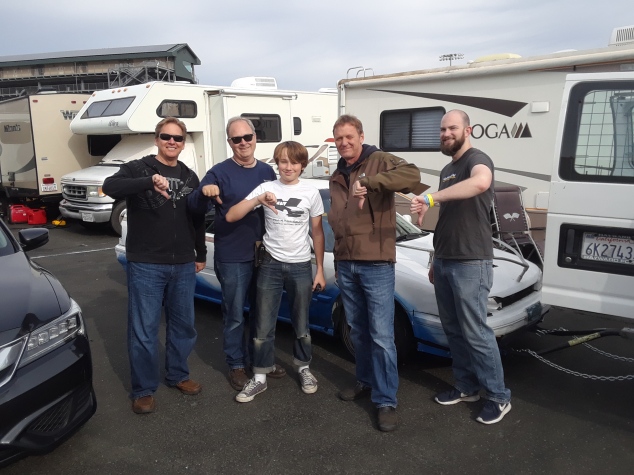 Traffic the last stretch on the freeway was monstrously bad.  It turned out that at 5am some damn drunk crashed a rental truck into a half dozen cars and a toll booth at the Bay Bridge and killed the Toll worker.  The bridge was half closed all day long.

When we got back we set about disassembling things so we could get the transmission disconnected.  I disassembled the suspension on the right side so we could pull the axle out and have room to move the tranny.  Dennis was having trouble with a bolt on a bracket on the underside.  So I gave it a whirl.  I was able to use an extension to get a socket on there then use the breaker bar to loosen it.  While down there I found this:

Duh.  The cv joint had failed so spectacularly that it had come out of the socket.  That would explain why we could put it in gear and let the clutch out and nothing much happened.

So we put together all the bits we had taken apart and started taking apart the other side.  We called around and found a store that had the right axle in stock and sent Jason to go pick it up.

We re-bled the right front caliper and flow to it was good this time, so hopefully the pull on braking will be gone.

Ewan’s repeated requests for lunch finally got traction and we visited KFC for some greasy grub.

When we got back Jason, Tedd, and Dennis were working on the axle.  It’s always hard getting that ring spring at the end of the splines in there.  We finally got and and put it all back together.  I dove right in and started at it.  We got it all back together about an hour after dark. 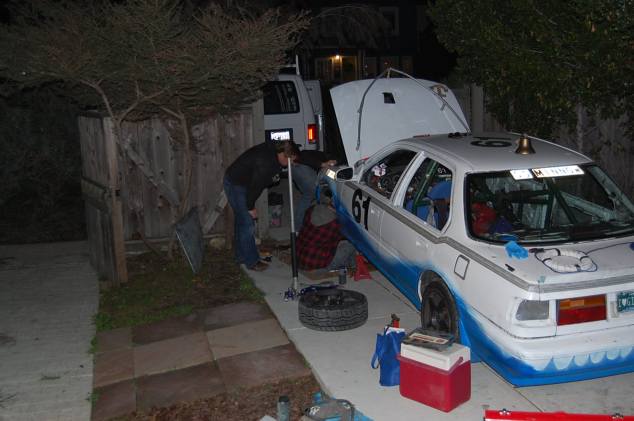 But since it is December that really isn’t that late.  Then we reloaded the van and hook up the car so it is ready to tow first thing in the morning.  We’ll have to get there early enough to either reclaim our spot or find another one. 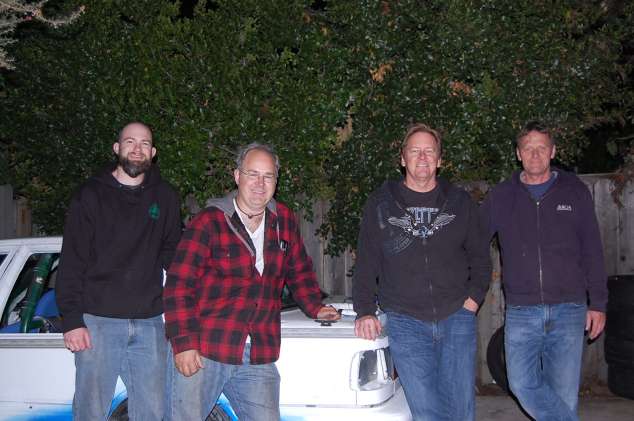 Dennis met me at Tedd’s. We got the car hooked up and I towed it up to the track. We got our spot setup. The car passed tech with ease. Judge Phil was our BS inspector. He said, “how do we usually class you?” I said, “B zero.” “And how is that working for you?” I answered, “we usually finish about 50th overall.” We are in B with zero penalty laps.

Driver’s meeting is at 9am. The race starts at 10am. Saturday’s order is Jason, Dennis, Tedd, and me, Mike. Sunday, Tedd, Jason, me, and Dennis.