Our old brakes with the ducting and the Hawk DTC60 pads made it through the Thunderhill race with about half the pad left, but those pads are really hard to modulate and they weren’t releasing very quickly either.  It was too easy to lock them up. Sonoma is much harder on brakes.  At the Thunderhill 3 mile course there are really only 2 places every lap where you have to slow from full speed down to 2nd gear.  At Sonoma there are four such places.  The tracks have roughly very similar lap times so Sonoma is much tougher on the brakes.  So two weekends ago I got the knuckles/hubs off a 1998 Acura CL3.0.  They are the much easier rotor-over-hub layout and they let us use 11.1″ rotors in place of the old 10.2″ rotors.  But our Akebono caliper brackets would not reach to the caliper mount holes with the 11″ rotors.  So I went back to the picknpull and got the Nissin 25T calipers off another Acura CL3.0 last Saturday.  Then we mounted them onto the knuckles over our new Centric Stoptech slotted rotors.  Then I ordered pads for the new calpiers.  No one makes race pads for these calipers (that’s why we had the Akebonos) but Porterfield is awsome and they’ll put just about any compound you want on just about any pad blank.  We are trying the Raybestos ST43 compound this time.  Lots of Lemons teams swear by it. 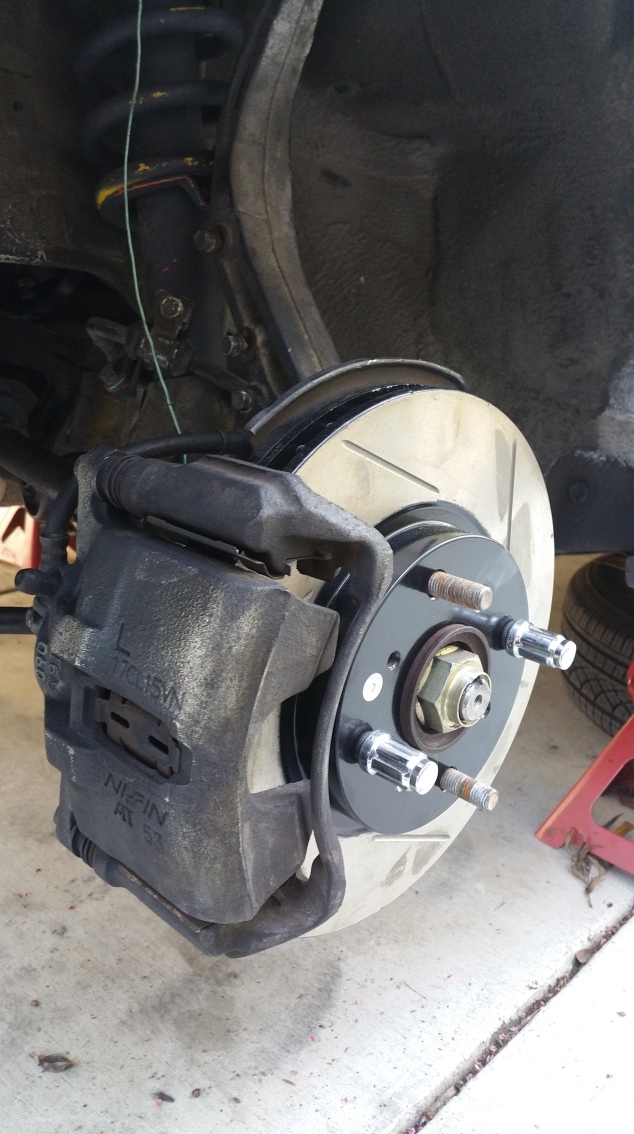 So the caliper piston is a few mm larger in diameter so more mechanical advantage, but the pads are bigger too so less mechanical advantage.  The rotors are bigger so more advantage and more thermal mass (the bigger pads will help with that too).  All in all the pedal feel should be a bit easier and most importantly the bigger rotors will reduce the friction force to slow the car which will reduce heat production which will make our pads last longer.

While I was at the picknpull Saturday I found an Acura Vigor.  I took the rear anti-roll bar off of it.  That was a bear.  The right rear wheel was still on because of a stud that was spinning.  So I had to work around that wheel tire.  Ack.  We got it on the Accord.  It is 16mm where the old one was 14mm.  That should increase it’s strength by around 70%!  Compensate for the increased tendency to push after the LSD was installed.

I also changed the tranny oil.  Next weekend the motor oil and filter, install the pads, bleed the brakes, and relocate/replace the battery, or not if the old battery took a charge.